We are publishing this inspirational article by Guest Author Elsa Dixon at a critical time for our world, wildlife conservation and especially this very special group of dedicated and brave women that have been leading positive change in their communities and preserving wildlife, particularly rhinos, in the Balule Nature Reserve in South Africa.  The world is in lockdown and as the flow of tourism dollars ceases and people struggle to feed their families, wildlife poaching is on the increase. The Black Mambas are facing new challenges and are now on fulltime patrol. If you would like to reach out and make a difference during this time of isolation and global separation, supporting these ladies who have been working non-stop with no chance to visit their families would be a wonderful thing to do. You can donate on the Black Mambas Anti-Poaching Unit website and/or take part in their Lockdown Fundraising Event and follow their progress on the Black Mambas Facebook Page. 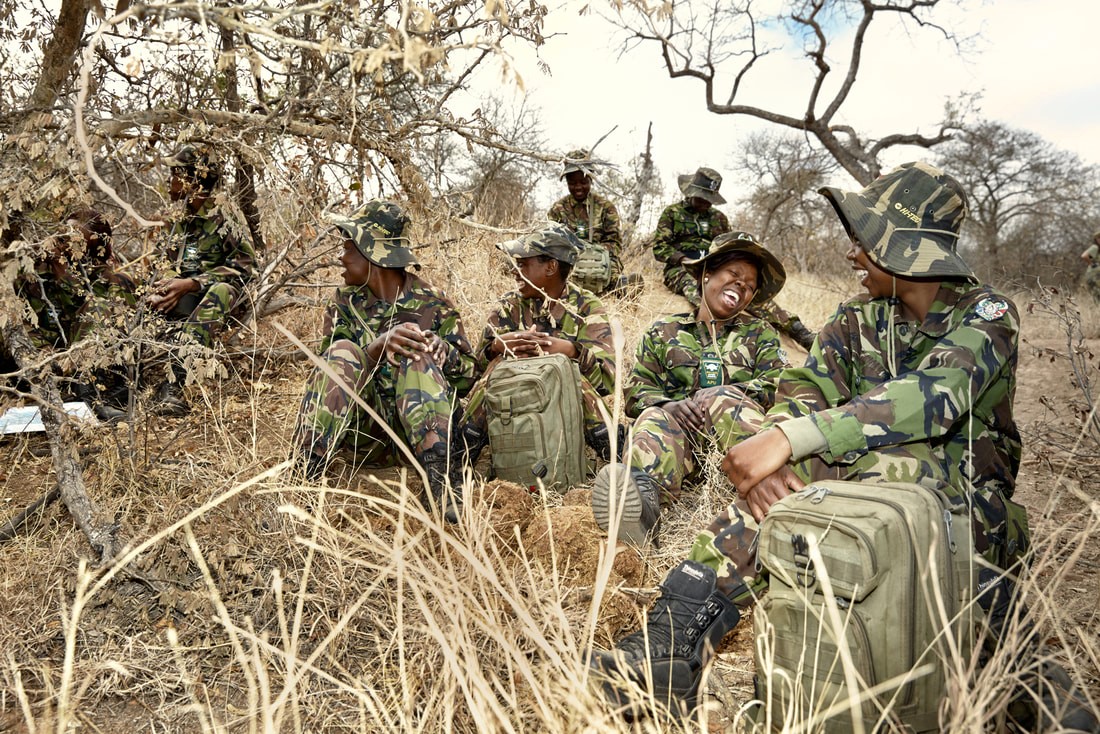 This is the story of a remarkable group of African women who, unarmed, are fighting the evils of poaching and protecting their wildlife heritage. The Black Mambas Anti-Poaching Unit is stationed on the Balule Nature Reserve in the Greater Kruger National Park in South Africa. The Game Reserve is home to the Big Five, and famous for its abundance of African wildlife.

I had the privilege of attending the World Tourism Conference in 2019 and listening to an inspiring presentation by this dynamic organization. Not only do they patrol the area without guns, but they also involve and uplift the local community through The Bush Babies Environmental Education Program.

They described themselves as sisters, mothers, future mothers-in-law, and teachers. Their mission is to "make the Greater Kruger National Park the most difficult, undesirable and risky area to poach," and to "develop a proud, sympathetic and patriotic community on their borders, making the people allies to the park."

The Black Mambas Anti-Poaching Unit was founded in 2013 and is hosted by Transfrontier Africa NPC in partnership with the Government's Expanded Public Works Program*. The managing director and former Chief Warden of Balule, Craig Spencer, was looking for an answer to the poaching problem. Primarily, he wanted the protection of the rhinos, rapid results and a long-term plan to deal with the illegal wildlife trade. However, he was also searching for a way to educate the local people and discourage the setting of snares to poach animals for meat. The snares are cruel and indiscriminate, causing great suffering while also catching other animals such as leopards, wild dogs, and even elephants.

Craig focused most of his efforts on strengthening partnerships with the adjacent tribal people and knowing that women are the caregivers in the community, hit on the idea of employing them in this mission. He selected six young ladies, provided them with military uniforms and put them through a rigorous 3-month instructional program, attending classes and undergoing fitness surveillance and survival training.

At first, people were skeptical that "women could do this traditionally male job and be good at it." However, they began operations on the periphery of the park, and within eight months, there was not a single snare to be found on the reserve. They were trained to use their eyes and ears, checking for spoor and possible routes that poachers would take. This resulted in another big success. The Black Mambas detected about 68% of the gun-carrying poachers encroaching on the reserve, and the park could deploy their armed resources to follow up. The rhino poaching tapered off dramatically.

Now, the Black Mambas became village heroes in their communities. In the course of duty, the rangers face danger from both poachers and large wild animals. Today the squad consists of 36 women and one man, operating in groups of two or three. In July 2015, the Black Mamba APU won the Best Conservation Practitioner category in the South African Rhino Conservation Awards, and later that year the Champions of the Earth Award from UNEP.

The local communities own considerable tracts of land within the Greater Kruger National Park. Their properties now form part of the Park, and multi-ownership agreements have been reached. The local people, therefore, have certain obligations regarding the management of the properties. Since they benefit economically, they develop a loyalty to the land and the wild animals. Harbouring criminals and poachers therefore adversely affects their lifestyle. Mr. Spencer believes that "social upliftment and education" will win the war on poachers.

The Black Mambas are engaging the local community through The Bush Babies Environmental Education Program. The goals are to "make the next generation passionate about nature and wildlife, to create an understanding of the importance of a healthy environment, to create an understanding of issues related to poaching, pollution, and other environmental problems, and to help future generations become responsible users of the planet."

At the Conference, the Bush Babies proudly declared that they are "role models", have "pride, skills, dignity, and identity", and that they are "family." In many African societies, the family is a broad and inclusive concept, extending to more than one household. This ethos lends more weight to the influence the Bush Babies have in their community.

They have built resource centers and introduced teaching programs at ten rural primary schools. They educate the youth through models used with great success in conservation efforts and in nature reserves. They have also established vegetable gardens at the schools, providing healthy meals.

Communities engaged in the school program develop their skills and take pride in their work. The program is educating the local people about the hazards of being a poacher. Setting snares, the local poacher runs the same risks as gangs and syndicates. 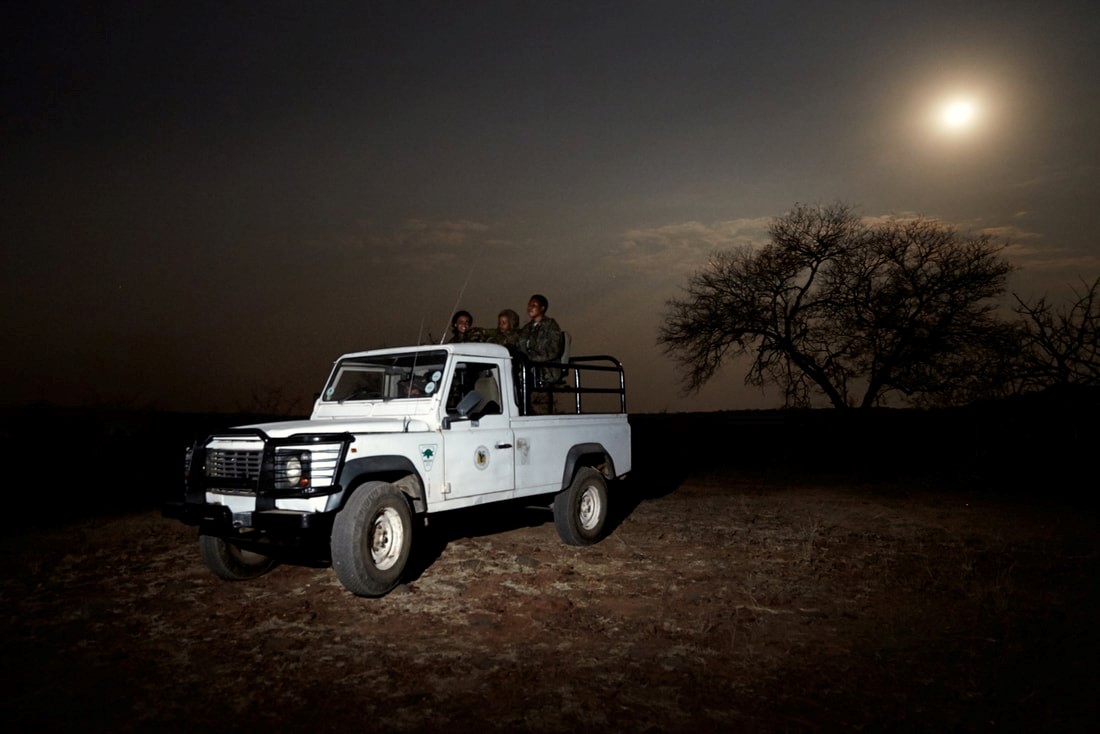 The ladies see themselves as 'mothers' in the community, emphasizing the centrality of motherhood in African society. Mothers are revered as creators and nurturers, wielding power in the lives of the children. Small wonder then that the group concluded that the letters B.M. stand for Black Mamba, Best Mother, Be More!

We would like to thank social justice photographer Julia Gunther for allowing us to use her beautiful pictures of these incredible ladies in action.

We also would like to recognize all the Partners and Sponsors that are supporting the Black Mambas and encourage our readers to look into each of their special initiatives.

Our appreciation goes out to Transfrontier Africa* who manages the Black Mamba Program in cooperation with the EPWP. If you are looking for an opportunity for a unique and rewarding on-the-ground African wildlife experience you might find their Balule Conservation Volunteer Project of interest.

* Transfrontier Africa acts in its capacity as a host agent on behalf of the Expanded Public Works Program (EPWP). The EPWP is a nationwide programme that was launched in 2004. The programme provides an important avenue for labour absorption and income transfers to poor households. It is also a deliberate attempt by the public-sector bodies to use expenditure on goods and services to create work opportunities for the unemployed. SANParks administers and accommodates the salaries of all our Black Mamba Rangers through the EPWP - Environmental Monitor Program.